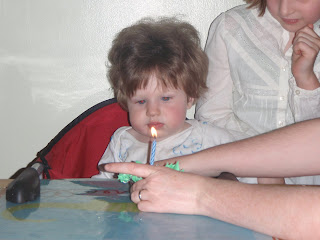 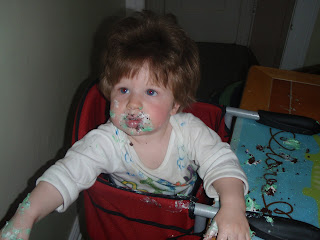 These pictures do not capture the joy with which the babe ate his cupcake. Yes he only got one cupcake with a candle as his own personal cake. The thing has lots of frosting and he didn't sleep the rest of the afternoon. BUT when he did crash he slept like the dead.

I was a little disappointed that he didn't blow out the candle, as we have been practising blowing for this very occasion all week! But his cousins were impatiant and blew the candle out for him.

There is now a spot on the wall that is a little lighter than the rest from where I had to wash off the frosting, and now two days later I am still scraping cake and frosting off his seat. My neice said that the hubby should have cleaned up "Well you're the one who gave him the cake, Uncle John!"

There is video of this but it is stuck on the camera...

Reggie - in the top picture, who is standing behind the kid? You? Or the taller twin? I honestly can't tell!

sadly the taller twin (megan)...she is a giant.