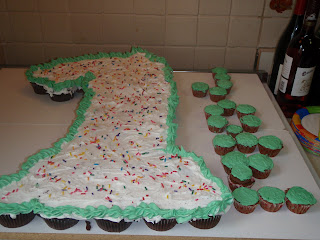 The babe will be one this Saturday, but we had a party for him this past weekend due to some scheduling conflicts. We had a few friends over, my mom (dad didn't come), the hubby's mom, the hubby's aunt and uncle (they are hubby's godparents) and my sister (not the one with the blog) with her kids, my sister in law also sent my nephew over with his babysitter (which was a little weird but he had fun)

I spent the day drinking and avoiding my mother in law. We don't get along very well when it comes to the babe. She has her ideas about how he should be raised and I have mine, you'd think that since I was the mom my ideas would be respected or at the very least listened to, but nope. I know that a lot of my feelings about my mother in law come from the fact that while I was still pregnant she told me I wouldn't make a very good mother. She said this because she was angry that I didn't want anyone in the hospital when I gave birth, and I didn't want anyone to visit in the hospital either. I was in the hospital for about 24 hours, and I wanted that time to be just the three of us. She was upset and felt that I was denying her, her grandson. She was also upset because I had said that if the babe was born I was going to take him to my brother's wedding regardless of how young the babe was. This is what sparked the not a good mom comment. She felt that a newborn with no shots should not be at a wedding. I felt that my brother should meet his nephew before going to Iraq.

It was all mote though as the babe was not born yet,and now everything the mother in law says is tainted to my ears. So when she showed up early this weekend I started drinking wine out of a plastic cup, mostly to give my hands something to do.

When my friend Gwynne arrived, I got to hold her baby for a long time, which was nice- what is even more amazing is that I don't remember the babe being as small as Gwynne's. And he for sure was at one point in his life...It made me want another soon. Particularly when the hubby (who had flat out refused to hold any newborns before having the babe) right away offered to hold the baby when Gwynne wanted to eat...

I also got to see my sister and her twin girls. I like having the twins around because they are older kids, so really like real people with distinct personalities. One, who is almost as tall as me even though she is only 7, likes to follow the babe around, the other likes to hang on to my sister. But the quiet shy one observes everything perfectly.

It is hard when my sister visits though, as there is no camaraderie of motherhood with her. She is a single mother not by choice, her husband passed away 7 days before the twins were born. She doesn't have it easy by any stretch of the imagination, and I would never in a million years trade places with her; but I don't like feeling like I can't talk about my own feelings of how hard motherhood is with her, because she always turns it into she has it worse.
This sister I think best embodies the family philosophy of no emotion, the suck it up and deal with it mentality that we all grew up with and all possess to some extent. I wonder if this sister will be a support and resource for my blog sister, or if she will turn her nose up and say "well you had a choice, I didn't".

My brother was at work as usual, his wife as well. Their son came with the babysitter who is quiet and shy in the face of our loudness. My nephew followed the babe around with my niece, avoided the dog and laughed at my friend Gabe imitating a duck for ten minutes

My other brother was in the desert somewhere. I am sending him pictures of the one year old nephew he has never met. He should have been celebrating his one year wedding anniversary on 5/5, what do you get a man in the desert for the paper anniversary?