So I was charged with finding out if my parents will be home when my sister wants to tell them she will be adopting a child. Do you know how hard it is to ask my parents a specific question? As soon as I attached a date to 'will you be home' my mom asked 'why? are you visiting? Whats the matter?'


I swear my mother thought I was calling so I could go out to tell her I was pregnant again! I am sure she is suspicious as all get out, and I wouldn't be surprised if she called all my siblings to find out what was up. I want to be a fly on the wall when my sister tells them.

I've been reading my sister's blog, and recently she likened having a child to having a dog. I know people hate when others say this, but I have to admit that I agree completely. Before I had a child I had a dog. Ok technically I had two dogs- the first of my dogs is now the dog that the adoption sister calls her own. The second dog I found on the Crow Reservation in Montana. He was curled up in a pile of hay with the rest of his litter outside of a house that was being built as part of a science project. The house, which was made of straw, was featured on Oprah (though Oprah didn't even come to see it) and the puppies were going to be left out in the wild. Most of the strays (and dogs that aren't hunting dogs) on reservations are left out, and folks just feed them and the cycle of strays continues. I took the litter to the local shelter, had them all de-wormed (they had been living off wild plums, and not much else) and chose the friendliest one to keep for myself.
I named the puppy Cheda with the help of a few Crow kids. The word is a bastardization of the Crow word for Wolf. People used to ask me how I was going to afford a dog, when I myself was living off of pasta and Buffalo meat that was left on my porch (by a hunter I know not just randomly) and a variety of food I could buy with my food stamp card. I couldn't afford a dog in reality the shots alone nearly bankrupted me (though the state of MT has a great plan in place for low cost vaccinations) the dog ate lots of meat, and cheese and he came everywhere with me. The dog was my child essentially. Heck it took me longer to name the dog than it did to name the actual child.

From the dog I learned patience and that a little mess never hurt anyone. People questioned whether the hubby and I would keep the dog when we had kids; if it were up to him the answer would be no, he and the dog have a love/hate relationship. Some people who will remain nameless were adamant that it was dangerous to have a baby and a dog at the same time. Sure we've had a few ripped up baby toys, and we can't buy anything with balls for the babe but overall the dog is like a four legged babysitter. Oz in her blog this week talked about her 'first child' tearing things and eating the baby's stuff, and yeah it happens here too, but more often it looks like this... 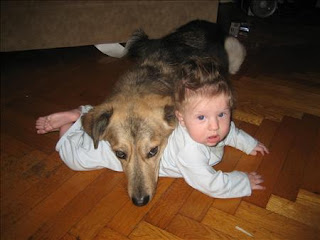 Well sort of since this was about 7 months ago but you get my point. This was even before the babe started to crawl- a skill i am sure he learned from watching the dog. Cheda is protective over the babe, and alerts us to any noise he makes. There is also a certain amount of jealousy between the two. Cheda will bark when we are all in our front room (the carpeted area of our house) since he is not allowed in, I think he feels slighted, and is wondering why the puppy is allowed on the carpet, the couch, the bed...

But then there are moments like these where neither of them know who is the human and who is the dog... 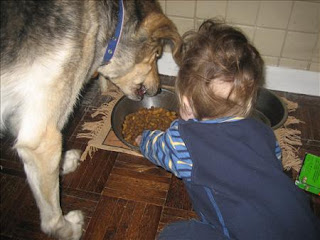 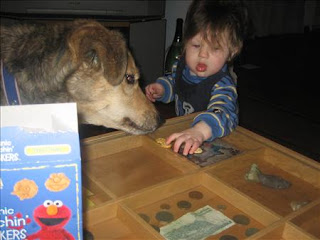